From the 4th to the 8th of March, Drive My Career took part in National Apprenticeship and National Careers Week.

From Monday to Friday, we ran a campaign with the support of our members Marshall Motor Group, JCT600, TrustFord, and Lookers. 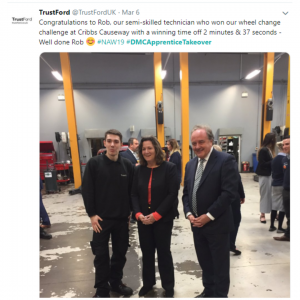 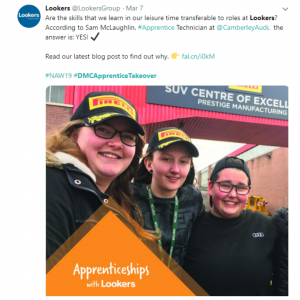 The focus of the campaign was to raise awareness of how exciting a career in automotive retail can be.  The apprentices from these dealer groups took to Twitter to explain their apprenticeship experience.

By using the hashtag #DMCApprenticeTakeover, the apprentices entered the competition.

The #DMCApprenticeTakeover reached over 200,000 people, along with over 1 million impressions in less than a week!

Marshall Motor Group was the overall winner as they participated with the accounts of several different dealerships across the UK using multiple social media outlets.

Oliver confessed ‘he fancies himself as Marshall’s future CEO’ and got a response from Marshall Motor Group’s CEO Daksh Gupta! He said he always likes a ‘little competition’ and added he will try to ‘keep the company in good shape until he takes over’. Marshall’s CEO also sent him a ‘How To Become A CEO’ book following his tweet! 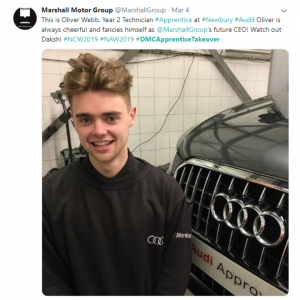 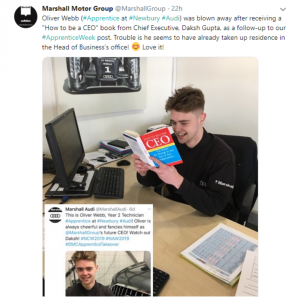 JCT600’s vehicle technician apprentice Jessica Suffield won the best tweet (below). Her description of the two years with the company, alongside a great choice of imagery, got the most engagement on Twitter. 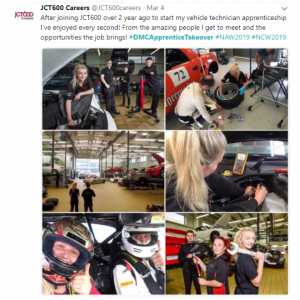 The winning apprentices for the best campaign and the best tweet received respectively a £100 and £50 voucher.

During the week, we promoted through our own accounts all the job sectors available within the automotive industry. These sectors included administration, logistics and parts, customer service and sales. The goal of the campaign was to showcase the range of automotive job roles besides being a technician or a salesperson. 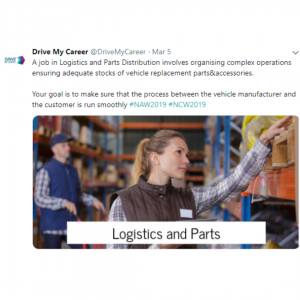 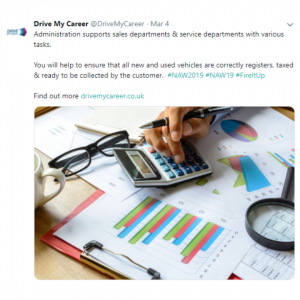 On Wednesday it was #AskAnApprentice day. Our own digital marketing apprentice took over the NFDA Twitter (@RMI_NFDA). Georgia answered some general questions on apprenticeships and the NFDA. The goal was to help the audience gain insight into Georgia’s job role and experience so far. 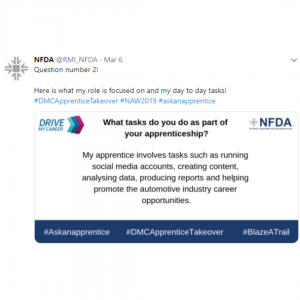 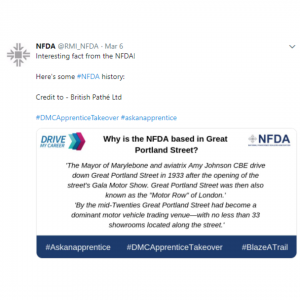 We would like to thank everyone who took part and the apprentices for giving us an insight into their experience. Congratulations to our winners…roll on next year’s National Careers Week!